How To Make A Double Sided Door Draft Stopper

The cold weather really hit us last week and we definitely felt the cold air coming in from under some of the doors!  Last year I weather stripped the doors, but the bottom of the doors this year seem to be a problem.  I tried rolling up towels and placing at the bottom of the doors, but they would un-roll and once you opened the door and went out – well the drafty air would come right in.  I decided it was time to make some door draft stoppers – yes you can buy them, but they are so easy to make – why!?

Once I made the double sided one I was on a roll and decided to go ahead and make 2 single sided ones for the doors we don’t go in and out of the house from.  I had some flannel like material that had been given to me and it was perfect!  Many of the DIY draft stoppers say to use rice, but I decided to go with cat litter.  I could get a 7 lb bag of cat litter at the dollar store for $1 and I was able to fill a double sided draft stopper and 2 single draft stoppers. 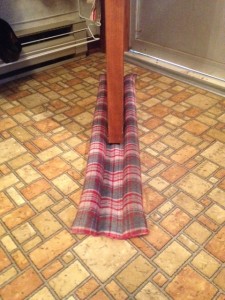 2. Measure and cut your material, preferably with one side being the fold (length wise).  I added 1″ on to the length of the material (for seem allowance) and made the width 7 1/2″.  The width was 2″ for the door width and 2 3/4″ inches for each draft stopper (allowing for seam). 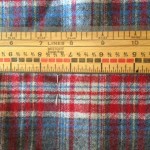 3. Pin your material together, right side to right side. Sew along one length side and one end, if your have a fold, if not sew along both length sides and one end.  I double seamed, knowing that this door draft stopper would be getting a lot of wear and tear. The first seam was 1/2″ and the second seam was a little less. 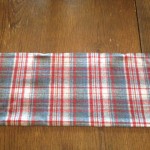 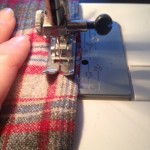 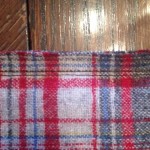 4. Turn your stopper right side out.

5.  Mark where you are going to make you seams for the two draft stopper parts of your stopper.  I marked a line at 2 3/4″ from one seam and then measured 2″ from that line and made another line. 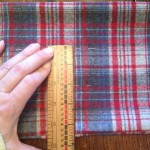 6. Sew your seams for the 2 draft stoppers.

7. Using a funnel fill one side of your draft stopper and hand sew closed.  Now fill the other side and sew the end up. 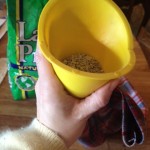 8. Slide under your door and that is it! 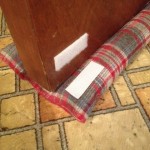 To make a single door draft stopper – follow directions but don’t add for under the door or the other side stopper. 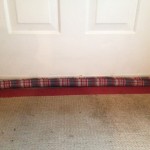 Copyright secured by Digiprove © 2015
This entry was posted in Crafts, Sewing and tagged draft stopper, sewing. Bookmark the permalink.