Our compost bin, or I should say lack of – since our compost bin is a pile of our kitchen and yard waste covered by cardboard and a couple of rocks.  The pile is in our front field, near where the garden will be next year.  After having the waste strewed across the rest of the field we decided to cover it with cardboard – and that helped – it now stays in one place! I wanted a real compost area, but I wanted to do it as inexpensively as possible.

A local warehouse here will give you their pallets, the ones that they are not going to reuse again – wonderful.  I had 2 pallets already left over from the delivery of shingles when they were putting my new roof on – so I needed 2 more for the first part of the compost bin.  Eventually it will be a 2 part compost bin and will have used 7 pallets.  I went to the warehouse during my lunch and asked what pallets could I take. The guy asked if I had someone else to help me – I said no and that I could do it.  I got another look and then he told me to follow him. I was dressed in a skirt, but I did have my work gloves with me.  When we went outside he asked me what car was mine – told him the Jeep Cherokee – another look.  I backed the car up to the pallets and we loaded the first one – at this point he told me we would not be able to load anymore.. what?!  I told him I thought we could fit 1 or 2 more – another look – but when we were done 3 were loaded.  He wanted to make sure that I had someone at home to help me unload them, which I told him I did – even though I did not.

I went to the local hardware store and bought the other items that I would need to build with: 2 hinges, a latch, heavy gauge wired and pliers to cut the wire.  Total cost of $12.59 and I would not use all of it! 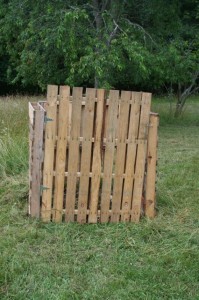 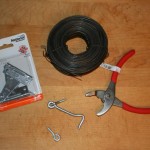 Note: Many warehouses will give away their pallets, it is either that or through them away.  You can also usually fine them on craigslist.org under free items or materials.

2. Lay out the pallets as you want them. For the sides of the pallet that the door will attach on – place so that the 2×4 sides are facing out – this is where you will attached the hinges and latch.

3. Cut your wire, length will be determined by the thickness of your pallets – I cut mine about 2 feet long.

4. Connect the back and side pallets with wire and the top and bottom. 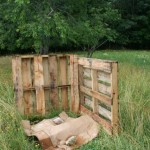 5. Connect the hings to the left side 2 x 4 – making sure that they will line up to a place that you can attach them to the door.

6. I placed a spacer under the door when I was lining it up for the hinges and latch.  I did not want it to drag when open. 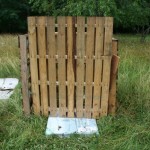 7. Attach the hinges to the door.

8. Shut the door and line up where you want the latch and attach. 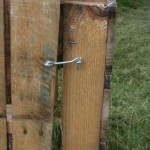 Your very own compost bin and a very reasonable cost! 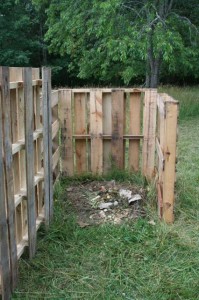 Copyright secured by Digiprove © 2013
This entry was posted in Building, Crafts and tagged build your own, compost bin, pallets. Bookmark the permalink.

3 Responses to Build Your Own Compost Bin Using Pallets