I have written about Big Baby before, but to give just a little bit of history – Big Baby was given to Stella for her first birthday and she has been a favorite doll ever since.  Big Baby was Stella’s first American Girl Doll and she has been through a lot, even under going surgery a couple of times! A recent afternoon we were sitting out on the deck with our cousin and a conversation meandered here and there and we ended up talking about knitting and sewing.  Over the course of several winters I have tried to teach Stella to knit, but have never really succeeded, but she does love to sew, by hand – she is afraid of the sewing machine.  Our cousin asked her if she had made any clothes for big baby, the answer being no and asked why not?  Well this was all that Stella needed and for several days the questions were do you have a sewing needle and thread and material?  We went to the storage unit and I was able to find the sewing box, but there were no material scraps inside.  I could see the material box, but I could not get there!

In town there is a great little shop called Angels in the Attic – I went in there and for $1.31 I was able to get material and 2 types of lace.  Stella was very excited, but before she had time to make a new dress we had some time to waste in town and so I took her into Angels and she found another piece of fabric she thought would work nicely. 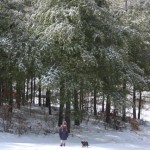 The cat and Stella

It was  a snowy day and I told Stella that I would help her make Big Baby’s dress, but before I could do that Stella had already 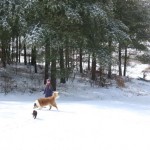 cut out half of the dress using another dress as the pattern.  The dress was a little small – so for the other half we made it extra big -so that when Stella sewed the two pieces together it would make a dress that would fit.

Stella cut the fabric, sew it together (with some help from mom) and put the dress on Big Baby – she was so proud.  She is still trying to decide whether or not she is going to add some lace – so I will just have to wait and see what the decision is or that the dress has changed! 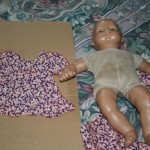 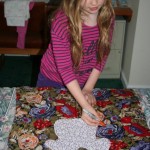 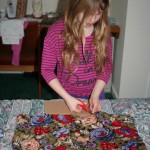 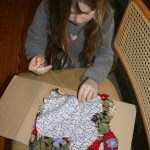 And Big Baby modeling her new dress – made personally for her by Stella! 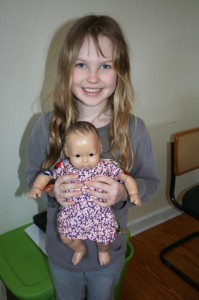 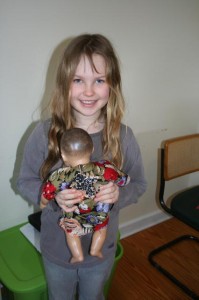 Copyright secured by Digiprove © 2013
This entry was posted in Kids Crafts and tagged crafting, kids, sewing. Bookmark the permalink.