We did all our preparations, helped the neighbors and then waited.  This kids made their rounds between the houses during the day, they were all scared and wondering what was going to happen.  Several of our neighbors were on vacation so several of us did what we could to get their items off porches, stairs, yards.  It rained for most of the day, but the real rain started about 7:30.  We have large trees around us and there was concern that trees would be coming down left and right because of how saturated the ground was – everything was moved down to the living room and we set up one big bedroom – Stella on a blow up mattress, me on the couch, the cat above my head and the dog between Stella and me on the rug. Stella was having a hard time falling asleep, so we ended up watching 2 movies and then she was out in about 30 seconds.  I waited until about midnight to take the dog out since they were saying that the worse of the storm was going to be here between 8am – 10am – as we were walking out the front door I looked out on the road and there was a skunk – I quickly got Bernie back into the alcove but I got the umbrella stuck on the door – thinking this is the last thing that I need is to get sprayed by a skunk – I finally got back inside.  I watched until the skunk disappeared and then we quickly ran up the hill – on the way back down we did see the skunk crossing the street so we went over to the other side and waited – it finally went under the fence and into my backyard – we made a mad dash back into the house.

The power went out about 2am Sunday morning and we are not expected to get power back until Thursday. We woke up expecting the worst of the storm, but it never came. It was eerie, at about 10am the rain and wind stopped, it was so calm.  I spent some of the 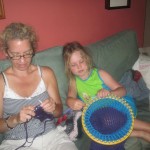 day tying up the flowers that had fallen over and then knitting with Stella.  The wind started picking up in the afternoon and was worse than the wind during the storm.  Another evening sleeping in the living room. We watched a movie by candlelight when we could no longer see to knit.

Today I offered to kid-sit for a friend in exchange for the ability to shower and charge up computers and cell phone, my friend was also very kind to make room in her freezer and fridge for some of our items.  Today was the first day that I was able to see any pictures of what the storm had done, along with trying to get over the my friends house – making several detours.

Went to the library to get a movie for tonight – saw everyone – people who did not have power or could not make it to work were all working in the library – every chair was taken! 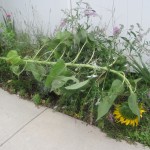 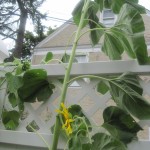 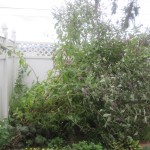 Copyright secured by Digiprove © 2011
This entry was posted in Life and tagged candlelight, knitting, skunk. Bookmark the permalink.