Many Jobs, Many People – The Crop Mob At Work Again!

This past Saturday was our turn to host the crop mob.  I had been looking forward to this and making the list of jobs that I wanted to get accomplished with so many people’s help.  Stella was looking forward to it because she was going to have a group of friends over.  As the day came closer checking of the weather forecast happened several times a day, first there was no chance of rain, then that changed going from 20% to 60%, worry set in.  On Friday I checked and the forecast did not look good, but I was keeping the faith and went and picked up the last of the wood pallets.  Friday night a big pot of roasted vegetable soup was made, along with some zucchini bread.

I woke early on Saturday morning and first thing I did was check the forecast – it had changed, the rain was not suppose to hit until 4pm – yeah!  Saturday morning was spent in the kitchen.  First breakfast was made and from there, the dough for the pizzas were made, then the toppings – then 4 pizzas were put together, covered and set aside.  Next blueberry buckle was made for dessert.  After that the salad was made, pine nuts roasted and the plates, napkins and silverware were set out.  The fridge had cold drinks ready and the cooler was stocked.  It was now 1pm and the “mob” was showing up at 2pm!

Stella and I went and trimmed the bushes where the wood shelter was going to be made – we were taking the last wheel barrel full of cuttings to the woods when the first car pulled up – excitement!

The garden fencing was put up:, measurement re-done, the gates laid out as to where they would eventually be hung,  post holes dug, posts put in, the metal stakes put in the ground, the fencing 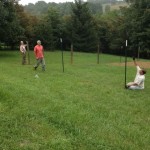 secured.  To see the fencing for a 50×50 garden site being put up by so many and in such a short time was wonderful.  Since there were two gates on the property I had found, 2 gates were incorporated into the garden – strategically placed so that a truck could pull in – this idea was a brilliant one by one of the participants.  How great that will be when compost is delivered or supplies for raised beds! 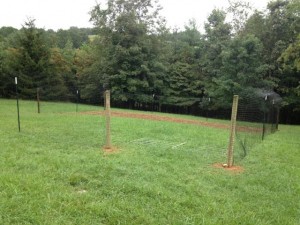 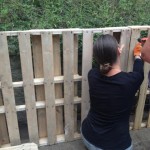 A wood holder was built outside the basement door for the wood that will heat the house this winter.  The structure was built with free wood pallets I had picked up from one of the businesses in town.  All was done except the roof – since I am still trying to figure out whether or not to do a permanent roof or just use a tarp and see how that works for one season. 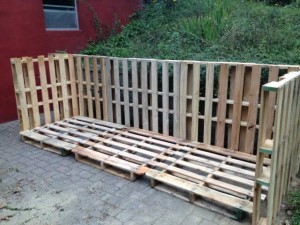 The clothes line post was taken out and a new one put in. 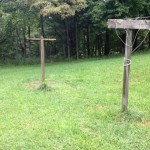 The old chicken coop had some work done – the entrance to the door was dug out so we can now open the door and all the rotted wood was taken off the nesting box. 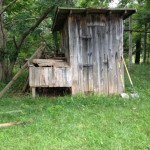 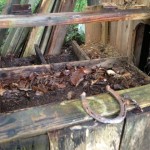 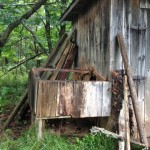 The 3 shrubs that were along the driveway and that the deer had eaten away at were pulled out.  All of this done in the course off 2 1/2 hours!!!! And the rain held off until the very end!!!!! 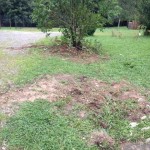 A cement turkey was left on the property and we had discussed painting the turkey – well that became a reality.  The kids painted the turkey and also named the turkey, Bob.  It was quite the production. 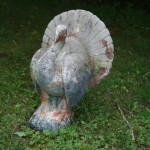 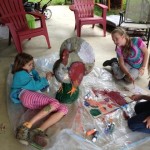 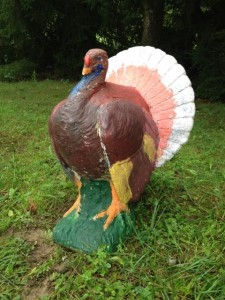 Part of the front garden bed was weeded and rocks removed by the 2 boys. 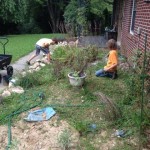 I had really thought that we would not get all these jobs done and did not have anymore.  I am in need of having my grape arbor redone, but thought that would be a job for another time.  I should have gotten the supplies.  Next time I will have many more projects and be prepared.

Over our meal we discussed how hard it is to figure out what all can be accomplished my so many in a 3 hour time frame and plans on how to do that are already being figured out for the remaining homes this year and for next year.

I wish I had taken more pictures, especially of us all enjoying a meal around the dining room table or of the kids having a dance party in the living room or videoing the trees being torn out of the ground – but I was hosting and making sure that everyone had all that they needed to get the job done and to nourish their body!  It was an incredible day and I am so grateful to all the work done my so many and the benefit we all received from each other!

Copyright secured by Digiprove © 2013
This entry was posted in Homesteading and tagged crop mob, homesteading. Bookmark the permalink.

4 Responses to Many Jobs, Many People – The Crop Mob At Work Again!