Moving is never an easy thing to do – the packing, the logistics, leaving of friends and familiarity, the learning of a new home and location.  Nerves are already on edge and emotions tend to come to the surface easier than at other times.  I wanted to share a story with you about my recent move.

As I contemplated about sharing this story – I also wondered why would a company that was based on customers feel the need to treat them they way they do?  The only thing that I can come up with is that for some reason it has become the corporate culture.  The reason I came to this conclusion is the fact that it was not just one person who lacked the skills for customer care but many.

I will not go into all the details of this move, but I wanted to at least share what happened so that others can make an educated decision as to what service to use if they decide to move themselves.  I wish I had done some internet research prior to deciding to use Uhaul because I am not alone in my disgust of how they treat their customers and the people who ultimately pay their salaries! Before I go into details – this whole thing makes me think of the book All I need To Know I Learned In Kindergarten – I think this should be required reading for all Uhaul employees.

I reserved my Uhaul truck more than a month prior to me needing it – but as I was to find out it does not matter if you reserve a truck – that does not mean that you are going to get that truck or a truck that will fit your needs.  I also decided as I was booking the rental to go ahead and hire movers through the Uhaul site – mistake #2.  About a week prior t the move I called Uhaul to update my phone information, making sure that my cell phone was listed on my record – so if need be I could be contacted my them – this I did 8 times and it was finally updated March 25, 2013!  The day before the pick up date Uhaul is suppose to call and confirm you reservation and pick up location – as of 2pm I still had not received a call – so I called them and was told that there was a possibility of me getting truck that I reserved but it was not guaranteed because it all depended on whether or not the person dropped it off and I would not be getting it in the morning but in the afternoon and instead of being 15 minutes away it was over 90 minutes away! That was my first meltdown.  I told the person that the moving help was to be there the next day at 11am and what was I to do.  At this point I was told that just because I reserved a truck did not guarantee me a truck and I should have not scheduled the movers for the same day as I was picking up the truck.  I told her this was unacceptable and what else could they do for me?  I was put on hold for 30 minutes and then when she got back on I was offered a smaller truck with a trailer – I then asked if it was the same amount of space and was hung up on.  The hanging up on seems to also be part of the customer service standards.  To make a long story of the day short – I was given a smaller truck and a trailer with a new location and a guarantee that it would be available for pick up at 9am.

My neighbor drove me to the Uhaul location and thank goodness she said let me wait until we know you have the truck.  Well there was not truck only the trailer – the truck had been dropped off at a different location and that location had already reserved it for someone else!  The manager at the location I was supposed to pick it up – called the other location and explained what happened and had them hold the truck for me.  My neighbor drove me to the new location  – 30 minutes away. When Uhaul guarantees a reservation and that is not met they are to refund you $50 – well the location that was suppose to rent me the truck couldn’t do it because I was not renting anything and the new location told me that I was not due the refund because I should just be happy that I got a truck!  I had also reserved packing blankets which this location did not have and I was told to go back to the other location to pick them up.  Here is where I had my next melt down.  This manager called the other manager and yelled at her and then hung up. I told her that I would just take what blankets she had and be on  my way – where I was told that she took care of her customers and she would get me my blankets – after 30 minutes of waiting one of her staff returned with blankets.  I was not sure I would make it back in time for the movers. 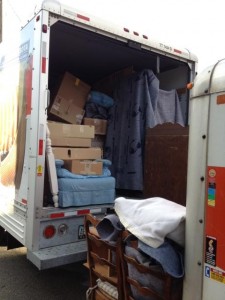 I won’t even really go into the movers – but they were unprofessional – taking phone calls while they were suppose to be loading.  The long and short of it here is that they only about a third of my belongings into the truck and left.  The next day after another meltdown seeing what was still left in my house – we realized that they did not wrap the furniture and many pieces were damaged and that they pretty much threw everything in.  Myself and two friends unpacked and repacked the truck and packed the trailer. That same day I contacted the moving help and was told that I had to make a complaint on line – but at the moment I did not have internet – that would have to wait. This is still on-going since they really cannot do anything for you – you have to deal with their sub-contracted movers – who do not return calls.

The trailer – thank goodness for my friends – one of which drove the truck for me to get the trailer hooked up.  The reason – well you can’t pull down the ramp on the truck if the trailer is attached.

Now everything was packed and we were ready to go.  None of us realized that with the trailer we could only go 55 mph – this added 4 hours on to our trip time.  Because the truck was pulling a trailer it also cost way more in gas than if I had the truck I originally reserved.

Now for the good part! I still had not been given the $50 refund for their guarantee.  On March 3 I called Uhaul and explained everything that had happened – more than what is here.  After being on hold on and off for an hour – the customer service agent came back on and said that he had spoken to his supervisor and she had spoken to her supervisor and they were going to give me a full refund.  He verified my credit card information and told me that a credit would be issued and appear on my card in the next 5 – 7 days.  I was to appreciative of what he did and thanked him many times.  This is not the happy ending!

I notice that a $50 credit appeared on my credit card – I called Uhaul on a weekend.  I was told that yes in my record it stated that I was to get a full refund and no there was not a manager that I could speak to about it, but that I would be contacted by the Hudson Valley office on Monday.  I was contacted by the office where I was told that I did not warrant a full refund and that now my record stated that I had requested a full refund and I had been denied. I explained the situation and yes after being told several time that that is not what happened I did raise my voice.  I was then put on hold and another woman got on the phone and told me I would not be getting any more money and that I really did not even deserve the $50.  I asked if anyone had spoken to the agent or the supervisors – no and it did not matter.  I asked for the number of headquarters which she would not give me and then she hung up on me.

I called the corporate office and was told that yes my phone call was recorded and they would have a supervisor listen to the call and get back to me within 48 hours.  Needless to say, and are you surprised?, but no one got back to me.  When I called to follow up I was told that they tried to call me but they could not get through – I asked what number and it was my old NY home number – of course my cell number was nowhere listed in my record. I was told that yes they listened to my call and yes I was told that I was getting a full refund, but that do not feel I am warranted one and therefore they will not be giving it to me. I told them that I cannot believe that they say one thing and do another and that it was beyond me why they would not do the right thing and do what they said they would. I was told that it did not matter and that they would not be giving me a refund and it did not matter what I did.

I explained to Stella what had happened, remember she is 9, and asked her what she thinks is the right thing to do?  She said give the refund.  I have taken it further and all I have to say to Uhaul is shame on you for not backing your agents and the word given to a customer.  If you plan on using Uhaul I highly suggest that you reconsider and if this story does not convince you – read the reviews on line – this tends to me their model of customer service. 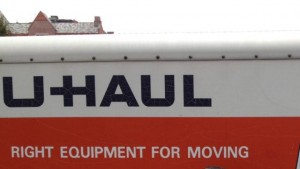 Copyright secured by Digiprove © 2013
This entry was posted in Life and tagged Life, moving, Uha, uhaul. Bookmark the permalink.