After making my cowl Stella asked if I would make one for her.  She went to the yarn stash and picked out the yarn she wanted me to use – it had no wrap on it – so no idea gauge, suggested needle size – I would have to wing it.  I started once and then had to rip it out, started again and had to make some changes along the way to make it the “right” size.  I have a knitters bible and it has many patterns and Stella chose the one she wanted me to use in her cowl – that was an opportunity to really use my brain – since the stitch count for the pattern was high – so this cowl I would have liked to be a little bigger, but that was not an option!  After all the opportunities presented – it turned out really nice and Stella loves it!! 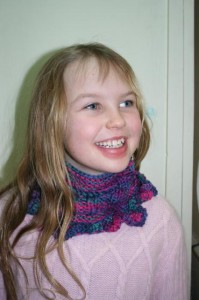 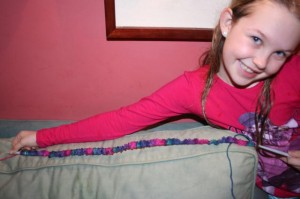 Row 1: *K2, lift first on these 2 stitches over second and off the needle*, repeat to end of row. You will now have 92 stitches. 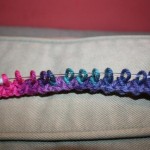 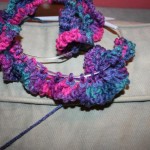 The pattern going forward is 18 stitches plus 10 – I doubled the pattern, but depending on your yarn, needle size and finished sized you can adjust accordingly. 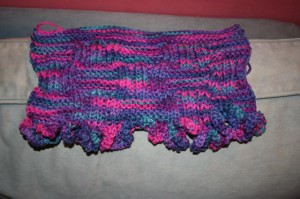 When you have reached your desired length – knit the next 3 rows and bind off.

Using the mattress stitch sew up your cowl and then weave in all your ends. 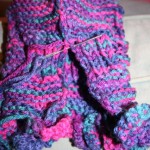 The ruffle, I think, really makes this cowl and makes it very feminine!

Copyright secured by Digiprove © 2013
This entry was posted in Crafts, Knitting and tagged girls cowl, knitting, pattern. Bookmark the permalink.