What exactly is a GMO?  Have you ever wondered?  GMO stands for genetically modified 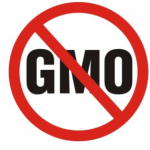 organism.  You might have also heard or read GEO – which stands for genetically engineered organism.  Ok, so we now know what the acronym stands for but what does it mean? Genetic engineering involves taking genes from one species and inserting them into another or to state it more plainly, GMOs refers to crop plants created for human or animal consumption using the latest engineering to enhance desired traits such as increased resistance to herbicides or improved nutrition content.

There are two types of GM seeds – one that allows the plant to survive while pesticides are sprayed to kill surrounding weeds and the other where it has its own pesticide, whereby when a bug eats the plant its stomach will explode.  We have been told that GM foods are of no harm to humans, but logically does that really make sense?!  And if GM foods do not cause harm to humans who consume them and supposedly have a higher nutrition content – then why are we not told what foods contain GMOs?  Is your mind starting to ask some questions and try to figure out the ill-logic of what you just read?

The 2 largest GM (genetically modified) crops are corn and soybeans, with cotton, rapeseed (canola) and potatoes following.  Monsanto is one of the biggest producers of GMOs and they are hard at work to try and stop the passing of Prop 37 in California, which would require foods that contain GMOs be labeled, but the good part it looks like it will pass.  If you live in California I urge you to vote yes on Prop 37 – this will change everything in the GMO labeling fight for the rest of the country!  The funny thing is that when GMOs were first introduced Monsanto pushed for labeling because they thought it would increase profitability because consumers would choose it over other food choices – now I wish they had succeeded! And now they are fighting labeling, hmmm – interesting.

Many people feel that GMOs are safe to consume – because why would our government allow harmful substances in the food we eat and our children eat?!  The only human study conducted using GMOs found that GMOs survived inside the stomach of the people eating GMO foods. No follow-up studies have been done.  In March 2001 the CDC reported that food is responsible for twice as many illnesses in the US as compared to estimates done 7 years earlier. This roughly corresponds to the period when GMOs were introduced into the food market and Americans have been consuming.  This same time frame corresponds to the increase in digestive disorders, which makes sense – remember I stated that some seeds make the bugs stomach explode?  If the only feeding study done on humans with GMOs found that they survive in the stomach, makes me think that it is doing destruction on our digestive systems the same way they do on a bugs digestive systems.  Food for thought, and yes pun intended.

Most of the EU has some type of ban on GMOs – why is the United States and for that matter Canada so far behind the times?

Please take some time and educate yourself and what you and your family consume.  It amazes me how so many people will do the research to figure out what car is best for their needs, what neighborhood to live in so their kids can go to the best schools and even what is the best credit card based on interests and perks – but for the most part buy their food based on marketing and reports that the majority are done by the industry and therefore biased.  It is time we took back our foods, our farm lands and our health.  Prevention is so much easier than maintenance of disease.

Funny thing – it seems that when I do a post on a specific issue others seem to follow suit or really great minds think alike.  But as I was getting ready to tweet an FB this post I came across this article this morning – and since it was so appropriate – I am putting the link: http://www.naturalnews.com/037590_GMOs_Americans_consumption.html

Thank you for reading and I will now step down from my soap box!

Copyright secured by Digiprove © 2012
This entry was posted in Nutrition. Bookmark the permalink.

2 Responses to Confused About GMOs?