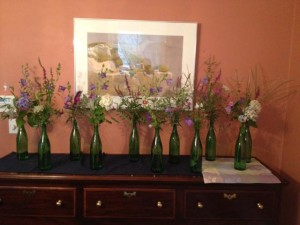 When my friend’s neighbor was planning her second wedding to her college sweetheart – a lifelong bachelor who was ready for a big celebration – the discussion turned to cost and one of those being the cost of flowers.  Most people spend between $3,000 and often up to $10,000 to decorate with flowers for a wedding with about a 150 guests.  That wasn’t in the budget for a woman who was going to face the lofty college tuition bill of her eldest son in a couple of weeks! Besides “arranged” flowers – the kind you see at most weddings were not a match for the bride’s personality.  In her youth she was, and remains, today, a carefree, gentle soul who values simple, awareness living and the beauty of nature.

When my friend approached me and asked if I would be a partner in this – I of course said yes!  Was it possible that the two of us could take on the challenge of designing arrangements using flowers from our gardens or nearby fields that were aesthetically pleasing, but at no cost or very little (gas of course is a cost and time)? Could we capture the bride’s personality, but also match the ambiance of the wedding?  You bet we could!

We started by referring to the principles of Ikebana, Japanese flower arranging, which brings the viewer into both the negative and positive space of an arrangement.  They use few flowers or greens, which was great for us, since we needed to produce 19 table arrangements and two large alter arrangements, plus a couple of backups.  That’s a lot of flowers! 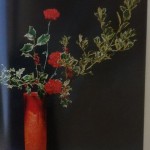 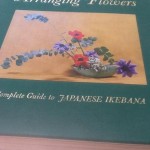 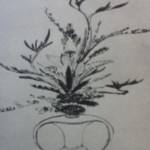 What could we use for vases that were of no or little cost?  We thought about canning jars – since I have many, but they were too large!  We needed vases with small necks, what between the two of us did we have that would work?  My friend, by luck, thought of using 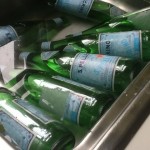 Pellegrino bottles!  After all, they were free (pretty much), a shade of green that matched the wedding’s woodland venue, and best of all they would not take many flowers to make a simple bouquet!  The only constraint we had with the bottles was that we had to choose flowers that had relatively skinny stems – which eliminated many of the garden flowers – but not the herbs, like mint, oregano and sage or many of the wild flowers. 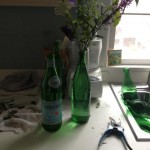 We have not had a typical summer here, as has been the case in most locations – which made the planning a little more difficult, along with the fact that the bride did not like yellow – so those flowers were out.  With spring coming very early and then a late frost, our high temperatures and either no rain or flash flood warning rains – flowers, grasses and herbs took a beating.

A couple of days before the big DAY – off we went – traveling the back roads, scouting 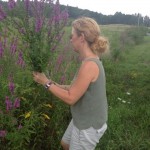 fields, roadsides and the lesser known trails, looking for flowers in bloom and interesting grasses.  I went traveling north, near the farm where I go blueberry picking.  With a friend in the car with me, scissors, water and buckets – we were off.  Driving along, with our eyes scanning everything – with a shout out – the car was pulled off the side of the road, scissors in hand, we were cutting this and cutting that – hoping to not be shot at as we trespassed beyond the No Trespassing signs.  We had to be aware of bees and we were rained on several times.  My biggest fear was driving back and having a spider or other large bug crawl up me as I was cruising down the Taconic Parkway!

buckets.  My friend, on the other hand had to figure out refrigeration and how to transports all her finds back from the beach.  She found that the basement worked much better than the refrigerator.  To transport back the flowers were put into coolers with ice packs and then seat belted in.

Saturday morning came and I was up bright and early – the flowers had to be done by 9:30 am – time enough to drive them to the venue and set them up before the big celebration. We had walked my garden a couple of weeks prior to the wedding, but when it came to the morning of – there was only a few items that were wedding suitable! My friend, decided that she needed some more wild flowers – so went out to drive the area looking for Queen Ann’s lace and some other ones.  It used to be in this area that wild flowers were everywhere, but now with all the mowing and pedigree and manicured  lawns and open spaces – they are harder to find.  We had our flowers all over the kitchen – now the work began! 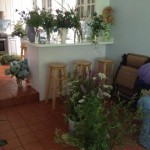 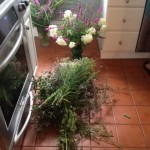 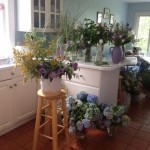 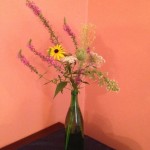 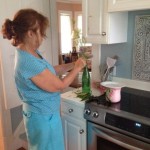 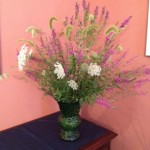 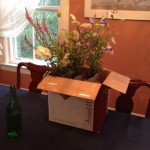 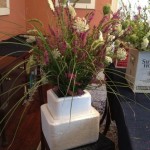 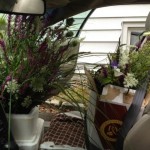 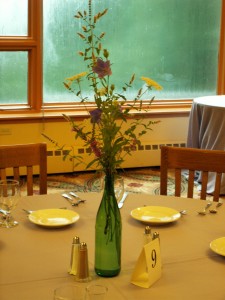 The comments were all positive! The flowers were artistic, captured the personality of the bride, liked that they didn’t take up the so much space on the table and you could see the person sitting across from you.  Many people were surprised that the large arrangements were all wild flowers!  And many said that we should go into business – would be a great excuse to invest in a green house!!

Copyright secured by Digiprove © 2012
This entry was posted in Crafts, Garden and tagged flowers, weddings, wild flowers. Bookmark the permalink.