Dish Cakes, What In The World Are Those?

We have pancakes almost every morning.  I make a big batch on the weekend and then just pop them into the toaster oven in the morning and we have a hot breakfast that starts our day right.  I came across a new pancake recipe that look interesting and tried it out yesterday – it was a HUGE hit!  I need to do some experimenting on soaking the flour in buttermilk, which I think will work nicely.  This time I used sprouted flour.  I could also see using these with lunch and/or dinner – they do not have to be just for breakfast – since there is no sugar and they are not sweet!  In the original recipe these were called pop up pancakes, but I made a couple of changes and think a better name for them is dish cakes – since they really seem to be dishes that you fill. 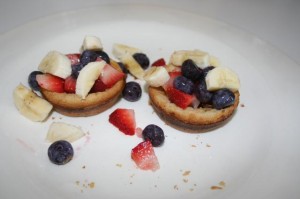 1. Melt the butter and allow to cool slightly.

2. Get all the other ingredients together.  I added a splash of vanilla, which I could not taste – so probably would not add again, and then I added cinnamon, which I would keep for breakfast cakes, but not if I was using for dinner or lunch – I would add another herb to the mix. 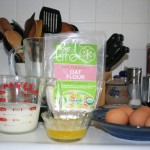 3. Place all ingredients in a blender and blend until smooth. 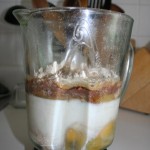 5. Grease your muffin tins very well.  This should make 24 dish cakes.  I used butter to grease the tins.  You really need to GREASE.

6. Pour the batter into the tins, filling about half way. 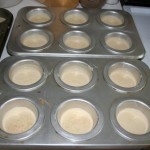 7. Bake for 15 minutes or until golden brown.  The cakes will pop up when baking.

8. Take out and pop the cakes out of the tins.  The cakes will fall upon cooling and if not – just give it a little tap and it will fall. 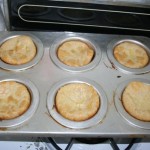 We chose to fill with fruit.  I did put the syrup on the table, but it was not needed.  Stella just picked them up and ate them – I used a fork.  You could serve them with syrup or a little powder sugar.  I think the next time I will fill the dish with sauteed greens and garlic.  These had a really good flavor to them and I loved the fact that there was not sugar!

Copyright secured by Digiprove © 2012
This entry was posted in Breakfast, Recipes and tagged breakfast, dish cakes, recipe. Bookmark the permalink.

5 Responses to Dish Cakes, What In The World Are Those?