As I mentioned in an earlier blog post – a friend needed to clean out her freezer of a past grape harvest – and we were looking for other things to do with the grapes besides juice and jam (those are coming next week).  We came across this recipe from Smitten Kitchen and figured we would give it a try.  We let the grapes defrost and then thought about cutting out the seeds, but figured that was too much work and it was not that big a deal.

This recipe looked interesting and the brine smelled really good – but I have to admit neither one of us has been brave enough to try it.  I have been invited to a couple of dinners this week and I am going to take a jar with me to one of them – braveness in numbers!!!  Also want to get other opinions.  In the recipe it mentioned that it was good with cheese and I am not a cheese person – Stella is that person in our house, but she is away – so also saving a jar for her to try. 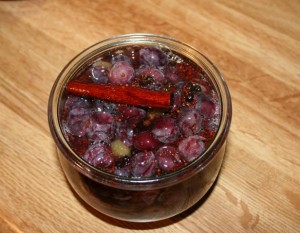 Ingredients (we tripled this recipe)

1. Rinse and dry the grapes,pull them from their stems. carefully and then using a small knife trim away the  “belly button” at the stem end of the grape exposing a bit of the flesh inside.  We allowed ours to defrost and drain.

2. Sterilize your pint size canning jars, dry them and divide the grapes among the jars.  For this recipe it should fill two pint-sized jars.

3. In a medium saucepan, combine the remaining ingredients. Bring to a boil over medium heat. 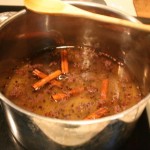 4. Pour the  hot brine over the grapes and then seal the jars.

5. Once cool, chill the grape and brine mixture in their jars in the refrigerator for at least eight hours or overnight. Serve cold.

Per the Smitten Kitchen post: Once the brine has boiled, you then have two choices. The original recipe has you pour the bring mixture over the grapes and let them cool together. I personally prefer a cold brine on certain foods, not wanting to wilt the fresh fruit, so I cool the brine completely before pouring it over. The former will yield a more tender pickle, and it will pick up the brine’s flavor faster. The latter will take a bit longer to souse, but the grapes will stay more firm. Both will be delicious.

I will put in the comments our reactions to the pickled grapes this week – check back!

Copyright secured by Digiprove © 2013
This entry was posted in Canning, Preserving and tagged canning, grapes, pickled, preserving. Bookmark the permalink.