Stella was recently invited over to a her first sleep-over in or new home town!  She was very excited to say the least.  We were asked to bring a dish for the pot luck and one that the kids would like.  What kid does not like mac and cheese?  I decided to try a new recipe.  I had made homemade mac and cheese before, when Stella was very young – and she did NOT like it – so I was keeping my fingers crossed on this one. 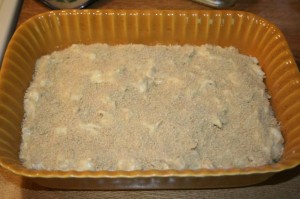 I forgot to take a photo out of oven, this is before

1. Cook and drain the pasta according to package directions.

2. Grate the cheese, set aside. 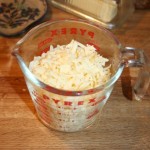 4. In a large saucepan, melt the butter. 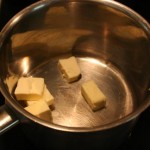 5. Using a whisk add the flour, salt and pepper.  Whisk until well blended. 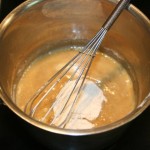 6. Add the milk and cream into the flour mixture – whisking constantly. 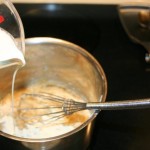 7. Bring to a boil, boil for 2 minutes – whisking constantly – you do not want it to scald or cook to the bottom of the saucepan.

8. Reduce the heat and cook, whisking constantly for another 10 minutes. 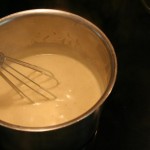 9. Add the shredded cheese, a little bit at a time, allowing it to blend and melt in-between additions.  When all the cheese has been added, simmer for a couple more minutes, making sure the cheese is completely melted. 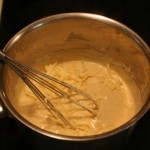 10. Take the saucepan off the heat and add the pasta – stirring to make sure that all the pasta is well coated with the cheese mixture. 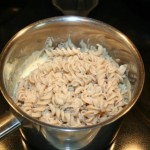 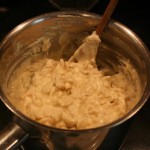 11. In a shallow, buttered baking dish – spread the pasta and cheese sauce.  Make sure that it is evenly spread. 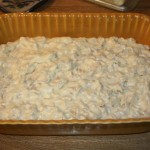 13. Bake for 20 minutes until the top is golden, if needed put under the broiler – watching closing at the end of the cooking time.

I brought the dish to the party and was told the next day that all the kids loved it and it was eaten quickly.  In the car ride home with Stella I asked her how she had liked it and she said she never got to try it!  Luckily she had a bite after I had spread it in the pan and she loved that bite!  Guess I will be making this again!

The original recipe posting had this to say about freezing it (I have not tried):
You can also freeze this recipe in zip-lock bags for later use – once you have mixed the macaroni along with the cheese sauce allow to cool to room temperature before adding to your freezer – I generally pull it out the night before and allow macaroni and cheese to reach room temperature; I then add the macaroni and cheese to a buttered baking dish, sprinkle with bread crumbs and then bake for 20 to 30 minutes, until golden brown on top and bubbling.

Copyright secured by Digiprove © 2013
This entry was posted in Dinner, Pasta, Recipes and tagged mac and cheese, pasta dinner. Bookmark the permalink.

3 Responses to Macaroni and Cheese, Need I Say More?!