The End Of Summer Vacation 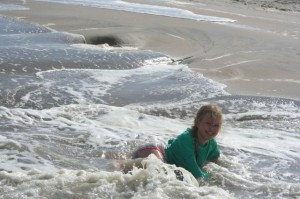 Usually we go on a 2 week vacation at the end of August.  Camps are done and school has not started, so it is the perfect time.  The other great thing about that time frame is most of the countries kids are back in school, that makes the crowds so much smaller!  This year due to me being back in school and other circumstances our vacation was  a long weekend at the Jersey Shore.

Several years ago I was asked to be on the board of a potential Hudson River Charter School and became friends with Gail, over time we have become walking buddies, information sharing friends, flower arrangers and integrative nutrition students.  For several summers we have tried to come to the Jersey Shore and be a guest at Gail’s beach house – and schedules as they are have never meshed until this weekend!  I am so glad that they did and so wish I had changed our plans in previous summers to come here.  There is something about sand between your toes, the sound and site of the waves and the sea breeze – it is grounding and renewing.

We have had some wonderful meals as you read yesterday and will the rest of this week and just the best time at the beach.  Stella has asked me several times if we could move here!  The weather has been perfect and the waves just keep getting bigger and bigger due to the weather in the South. 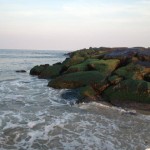 Our first evening walk on the beach

Stella and I both have probably eaten more sugar this week than we do in several months – since each night tradition here is to walk to the local ice cream store Beach Plum – where they make all their own ice cream – it has been delicious!

Stella had forgotten how to build  a sand castle – so we built one one day – but before I could get the camera out the waves took it away.  The next day she started to build a castle with Jeff, but instead they just kept digging a hole, which when they were done Stella could stand in it and the beach was at her chest! 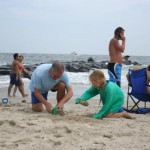 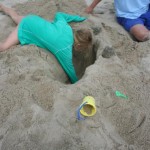 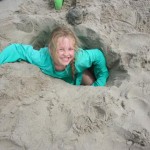 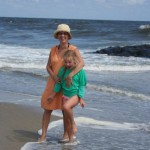 under tow stronger.  It has not been very good for swimming, but Stella has sure enjoyed playing in the waves!  High tide has been pretty amazing and on Sunday the tide came in farther than Gail and Jeff could ever remember!  People, us being among them eventually, would jump up and try to save their blankets and items from getting wet and washing away.  at one  point the water was coming from several directions and made a “tide pool” on the beach with some disgusting looking foam – the kids has a blast with foam fights and boogie boarding in the shallow water. 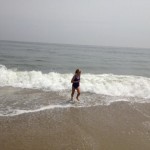 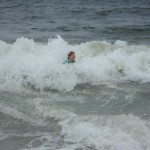 Waves on the last day 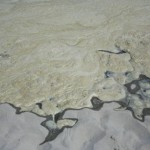 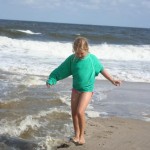 3 Responses to The End Of Summer Vacation