We were recently invited to a community potluck.  The potluck had been rescheduled due to weather and we were really looking forward to meeting all our near and not so near neighbors.  I was not sure what to make and bring and since I had been doing so much baking with pears – I decided why not another pear dish!  I have so many cookbooks, I decided to look up pears in several of them and finally settled on a recipe I found in my The Whole Foods Market Cookbook.

This recipe is super fast to put together and your mouth will be watering before you take it our of the oven – that is how good the smell is! 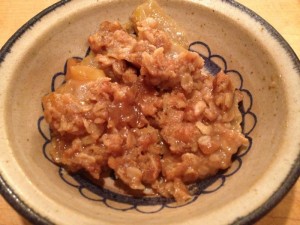 2. Cut the unpeeled pears in half, remove the seeds and stems.  Cut the pears into 1/2″ thick slices and place in a large bowl.

3. Add the lemon juice to the pears and toss. 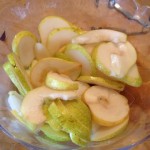 6. Measure the 1/2 cup maple syrup into a 1 cup glass measuring cup and add 2 Tbl of the melted butter – mix – it will become very thick.  Pour over the layered pears. 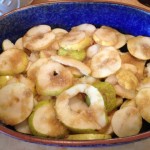 7. In a medium sized glass mixing bowl combine the oats, flour, brown sugar, cinnamon and the rest of the butter – mix with a fork until crumbly. 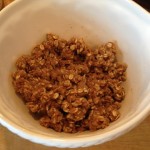 8. Sprinkle the oat mixture over the layered pears and bake uncovered for 45 minutes. 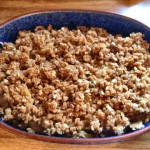 This is wonderful served warm, but no complaints served cold either! 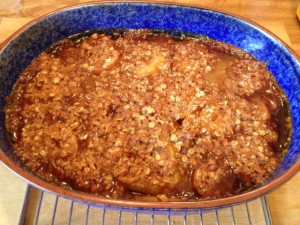 When this came out of the oven we waited a few minutes and then left to go to the potluck.  We drove there and no other cars were there, we went to the door and knocked – no answer!  It started at 2pm and it was now 2:30 – where was everyone?!  The smell in the car was torture – our mouths were watering in anticipation of tasting this baked goodness!  We waited a few more minutes and decided we would go into town and run our errands – with the dessert!  When we got to the grocery we saw our neighbors truck we searched for them to ask had the potluck been cancelled or postponed again – but we could never find them.  Back into the car and the smell – OMG!!! One more errand to go, we couldn’t take the torture and when we got home, before we even ate a late lunch – we had our dessert – DELICIOUS!  We never did find out what happened to the scheduled potluck.

Copyright secured by Digiprove © 2013
This entry was posted in Dessert, Recipes and tagged dessert, Pears, recipe. Bookmark the permalink.