After putting up 37 jars of diced tomatoes we were on to tomato sauce.  We figured that we would do a small batch of sauce as an immediate go to – after all these tomatoes we figured we weren’t going to want to making sauce in the near future!

This tomato sauce was a huge hit at our house.  Stella tried it on her tortellinis and told me it was the best sauce she had ever had and that I really needed to write a cook book!  I will take that as a “2 thumbs” up review! 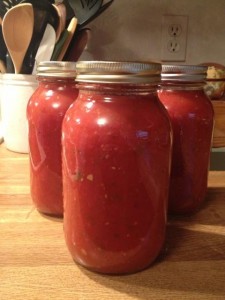 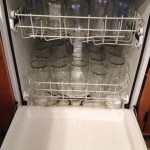 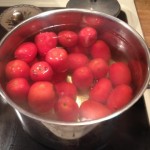 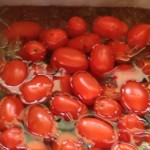 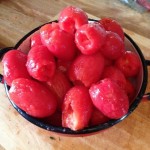 9. Chop the tomatoes up and place in a large soup pot. 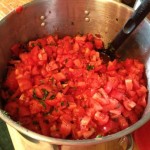 10. Chop up your basil and add to the tomatoes, mixing well. 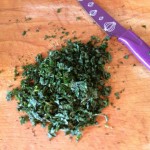 11. Heat your cast iron pan and add whatever oil you are going to cook with, we used bacon fat.

12. As your pan is heating, chopped up several onion and add to the pan – slowly cooking until translucent. 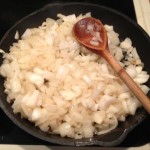 13. Chop several cloves of garlic and add that to the onions. 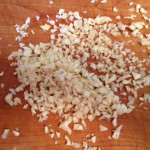 14.  Add the onions and garlic to the chopped tomatoes, along with 3 – 4 Tbl of lemon juice.

15. Place the pot of tomatoes on a burner and heat – you don’t want to bring to a boil, you want to slow simmer to thicken it and cook the tomatoes.  Add several bay leaves.  Stir occasionally so that the bottom does not burn. 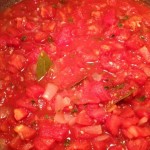 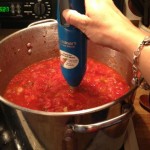 17. Place your tops into a saucepan and heat the water, but do not boil.  Let the tops sit in the water for at least 10 minutes – this will sterilize them and make the rubber sticky. 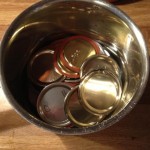 19. Place the jars into your water bath,using a jar grabber and bring back to a boil and process for 40 minutes (3,000 ft altitude).  Remember to make adjustment for your altitude.

20. Take the jars out of the canning pot and place on a dish cloth lined counter.  You should hear the popping of the jars – this is the jar sealing.  If the jar does not seal, turn it over for 20 – 30 minutes and it should seal – if not those are the jars you use first.

It will be hard to go back to store bought sauce after you make your own. So worth it!!

Copyright secured by Digiprove © 2013
This entry was posted in Canning, Preserving, Sauces and tagged canning, tomato sauce. Bookmark the permalink.

One Response to Even More Tomatoes To Make Tomato Sauce