What To Do With All These Beets

Not having a garden this year we have been very fortunate to have so many farms and gardeners around us.  I recently ordered a 20 pound box of beets and planned on storing at least half of it for the winter and then with the other half making several pots of borscht for canning and freezing and then pickling some.  I did get to the pickling but before I got to the soup I went down to get a few for dinner and realized that they were sprouting!  I then did some research and realized that I would not be able to keep them for the winter and the reason being –  that all the greens were cut off.  Because all the greens were cut off the beets were not sealed by their skin.

I figured over the weekend I would be making beef stock and a lot of borscht.  I was talking to my aunt as to where would be a good place to get beef bones and explained to her about my beets.  She suggested that I steam them and then freeze them and that would take the pressure off getting so much done over the weekend.  I had one of those DUH! moments.  I was so focused on how I was going to make bone broth and the borscht that I did not even think about an alternative way to preserve the beets for the fall and winter.  I went home that night and started peeling and steaming and over the next couple of days I had the box done and put up!  So glad that I had that conversation with my aunt!

Another Way To Preserve Beets 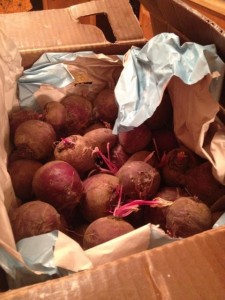 1. Wash and peel the beets.  Cut them up into quarters.  You could also wash the beets and then boil them, putting them into ice water after they are cooked and then peeling the skin off.  For some reason I just do not like boiling my beets. 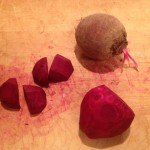 2. Place the cut up beets into your steamer and steam for 30 – 45 minutes.I have a double steamer, which is great for heating up foods or steaming a large batch of beets! 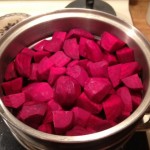 3. Once they are steamed (put them to the fork test, if a fork goes in easily they are done) either run them under cold water or put them in a bowl of ice water.  This will stop the cooking process and make them cool enough to handle.

5. Label your freezer bag with contents and date and fill with your beets. 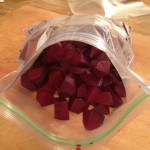 6. Seal the bag almost all the way closed and stick a straw in at the corner.  Push out air as you are sealing and then suck the rest of the air out with the straw and seal closed.  Place in the freezer.  You can also use a vacuum sealer. 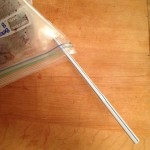 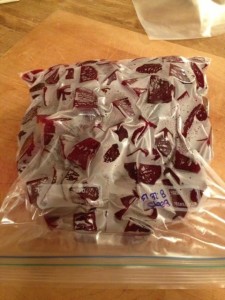 Now don’t forget they are in the freezer waiting to be used during the colder months.  A good borscht or beet, vegetable soup always hits the spot on a wintery day!

Copyright secured by Digiprove © 2013
This entry was posted in Freezing, Preserving and tagged beets, freezing, preserving. Bookmark the permalink.

3 Responses to What To Do With All These Beets