Tomato Pie At The Jersey Shore

This past weekend Stella and I were fortunate enough to be invited to our friend’s beach house on the Jersey Shore.  No, this is not the same area as the TV show, which I have never watched and only heard about, but Bradley Beach, a sleepy Jersey Shore town where people bike, walk, and socialize on their front porches.  The best part, we were only three blocks from the beach!

This was the first time for both of us to go to the Jersey Shore.  We got there Thursday night before dinner, but that gave us just enough time to stroll on the beach – Stella played in the waves and we collected shells.  The next morning I went for a nice run along the boardwalk followed by a bike ride with my friend Gail — we biked to Asbury Park  the launch pad of Bruce Springsteen.

I had never heard of tomato pies, but Gail raved about them, so I brought all the ingredients for pizza making and her CSA box this week was over-flowing with tomatoes.  We were set.

Tomato pies, which got their American start in Trenton, NJ,  are a unique culinary experience.  The purists despair that it shouldn’t even be called pizza!  It is not surprising that a state known for their tomatoes should create this equally tasty food.

Tomato pie features a small amount of cheese, placed directly onto the crust.  The cheese is an accent — no gloppy melted cheese that slides off at the first bite!   The main ingredient…savory, seasoned tomato sauce, topped with minced garlic and fresh basil…completes the tomato pie.

We took some liberty with our pies, since the family wanted their favorite ingredients. The two daughters wanted pineapple chucks, which were placed under the sauce.  The adults went with the traditional tomato pie, but since we had so many ripe, luscious tomatoes from the farm, we added tomato slices to the other pie. 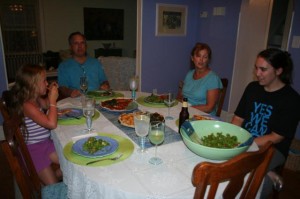 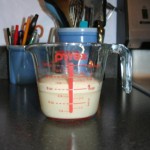 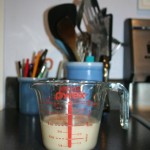 1. Place the package of yeast in a 2 cup glass measuring cup, add 1 cup warm water and tsp of sugar.  Stir to dissolve.  Allow to grow for about 10 minutes.

2. In a mixing bowl measure 2 cups of flour (preferably organic, sprouted), mix in the yeast.  Stir well – until a dough ball is formed. 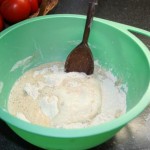 3. On a floured surface, turn out the dough ball and knead.  You will have to add about another 1/2 cup of flour while kneading.  Place to the side, cover and allow to grow about 10 – 20 minutes. 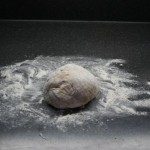 4. Chop your basil, mince your garlic and thinly slice your tomatoes.

5. Lightly oil your pizza pan and sprinkle with corn meal. 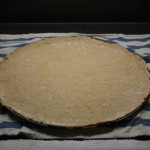 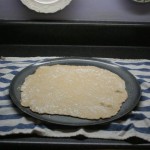 6. Split the dough in half.  With one half of dough form a ball and flatten.  Using a floured rolling pin – roll out the dough. Transfer the dough to the pizza pan and using your finger tips, press the dough outwards from the center to cover the pizza pan – with some extra at the edges.

7. Using the cheese mixture – make 2 circles of cheese on the dough. 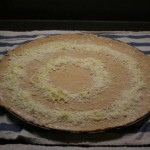 8. Place the tomato slices in-between the cheese circles and then in the center of the pie. 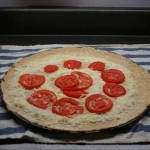 9. Sprinkle the garlic and half of the basil over the tomatoes. 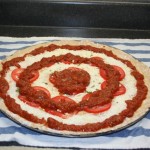 10. Cover the tomatoes and the outside pizza dough with tomato sauce, leaving a little dough for the crust.

12. When the pie is done cooking, take out of oven and sprinkle with the other half of the basil.  Transfer to a cutting board and allow to cool slightly before cutting. 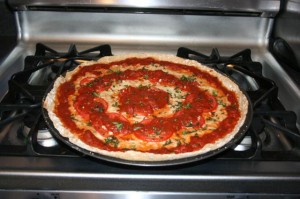 Dive in and enjoy!!!

Copyright secured by Digiprove © 2012
This entry was posted in Dinner, Recipes and tagged pizza, tomato pie. Bookmark the permalink.

2 Responses to Tomato Pie At The Jersey Shore