I know that I said I was done with blueberries, but I forgot to mention one thing – in regards to dehydrating them.  I mentioned two methods of preparing the blueberries for dehydrating (putting them in boil water or making a cut in each one with a knife) – well the ones that a put a cut in dehydrated faster and were easier to take off the tray.  From now on that is the way for me. 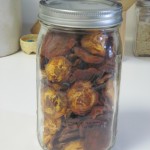 Finished dehydrating the apricots and the house and kitchen are back in order after several days of dehydrating and jam making… until it starts all over again in a couple of weeks and continues through October. Next on the list are white peaches and then there are pears, apples, pumpkins, grapes and if I can find a farm I am hoping for figs!

I mentioned in an earlier post that over the winter I came across an old drop leaf table and brought it home.  Yes, I can hear some of you, I am a dumpster diver and proud of it!  I have gotten many things off the sidewalk.  The table sat in my living room during the winter with me itching to start sanding it, which I came close to doing several time, but the dust that it would have created always stopped me.

In June I started the feat of sanding the table.  I started by handing sanding it, since I did 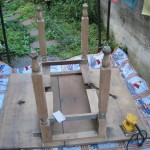 not have an electric sander.  Day after day I took the table outside and sanded – I probably could have used my hands to sand the table, they became so rough.  The progress was slow, painstakingly slow!  I will talk to anyone about almost anything, so I happened to mention to my neighbor what I was doing and he said I have a sander do you want to use it – of course I did.

The process sped up from there,but then we had many, many days of rain – so no sanding. 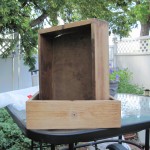 Then I was able to get a few days of sanding in and then the heat came, again no sanding.  My daughter has been away for the month of July visiting her father and I was determined to finish before she got back (I go tomorrow to pick her up – excited does not even explain the emotion I am feeling about that!) and to be able to take the items that sat on this table off the dining table.  I 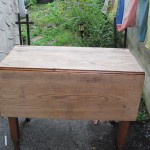 have been eating most of my meals from the coffee table.

The beginning of the week I finished sanding all that I could with the sander and all that was left were the areas that the sander could not get to – and there were plenty!  Wednesday afternoon – the sanding was completed and a glass of wine was thoroughly 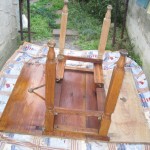 enjoyed in celebration.  That same night I started staining the drawers and the underside of the table and then yesterday morning I stained the top of the table. 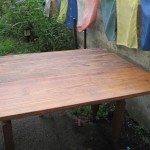 where was I going to display my treasure.  That started a spring like cleaning of the house because of course I wanted it where another piece of furniture was and when I moved it, having 2 pets, there were many hair bunnies hiding – so the vacuum came out and then the mop.  I moved the table into the house and admired it for quite some time, even having another neighbor come over and admire it too! Now I am hoping that my nails will grow back  – since they were sanded away in very weird ways during this whole process.  Enjoy your weekend – I know that I am going to!!!!! 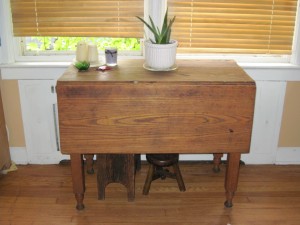 Copyright secured by Digiprove © 2011
This entry was posted in Crafts and tagged dehydrating, refinishing, sanding. Bookmark the permalink.