Trick or Treat – The Joy of the Sugar High! 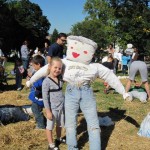 deal.  Washington Irving’s home is here and the Headless Horseman statue is across the street from the historic cemetery.  We see an influx of tourist during the month of October – to take part in tours of the cemetery or if you dare the lantern tour,  to hear the Legend of Sleepy Hollow performed at the Old Dutch Church or to take the Haunted Hay Ride – with a warning for those with heart conditions!  Every weekend there is an activity 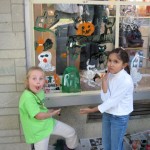 for the kids – build a scarecrow, rag-a-muffin parade, Halloween activities along Beekman, window painting and the most looked forward event – the Halloween Parade and block party.  The kids love the parade, if they are in costume they can march in the parade, but if you stand on the side you get to catch the candy thrown from the participants – then it is off to the block party – with music, dancing and fun all around.  This year the parade was scheduled for Saturday, but mother nature did not cooperate and decided to dump 10″ of snow – it was rescheduled for Sunday, but then cancelled!  Bummer, was an understatement expressed in our house and many others. 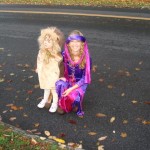 Every year I wonder what Stella is going to decide to be – we have done the princess route with only one year of being a lion.  This year she decided she wanted to be Storm from X-Men, but not the one that you see the costume of in all the costume stores – she wanted to be Storm from the comic book.  So, it was determined that she was going to do the white outfit – so it was off to figure out how to put the costume together, we needed a white dress, white hair wig, long gloves, wings and of course the badge.  I pieced the costume together and then was ready to start the making of it, when I was informed that she wanted to be Storm in the blue outfit, oh and by the way Storm does not wear a dress or have wings – it is pants and a cape. This all told to me on Thursday evening! 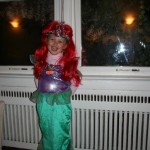 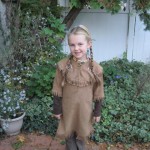 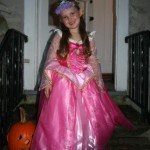 I had just finished putting up Stella’s summer clothes and taking out the winter ones and remembered that I had come across some ballet leotards and tights – would they work?  Up into the attic and to go through the boxes trying to find the items – found.  Stella, will these work – I think so.  They fit – BUT – they were pink and not blue.  That was ok – I could work with that.  Off to the computer to find a picture so that I would get the costume right – we found one.  The white wig and gloves would work – the leotard and tights would work, now what to use for a cape and then I was informed that Storm wore white boots – so could I go out and buy a pair – NO – I could not do that.

Friday morning it was off to find some blue dye – only had to go to two stores.  Home and the dying process began – done put on the 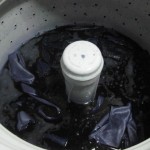 rack to dry.  Stella came home and wanted to see how they came out – now the tights did not match the color of leotard that she wanted to wear – being the smart mom that I am – I had dyed 3 leotards – and YES one of them would work.  I had an old pillow case that I also dyed for the cape. 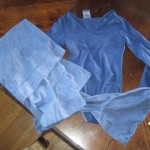 Sunday it was time to get busy – the costume had to be made and now the weather had turned – was there a way to make it a little warmer?  Not really since it was tights and a leotard – but the cape – what could I do there?  I had a couple of old white hand towels and Storm’s cape was blue on the outside and white on the inside – this could work.  For the white boots – a pair of old tights would work – cut the foot off and they would cover Stella’s shoes and the other part she would wear as leg warmers, but would look like the leg part of the boots.  Stella was going to make the badge. 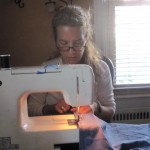 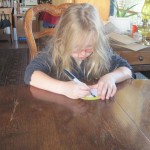 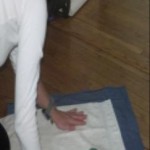 Ok – it was ready to put the costume on – and thanks to Grandma Jo – Stella decided that a home made costume was the best costume ever. 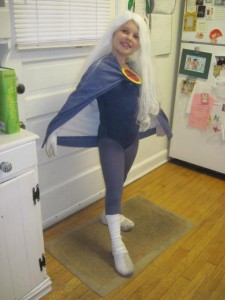 Copyright secured by Digiprove © 2011
This entry was posted in Life and tagged halloween, headless horseman, making a costume. Bookmark the permalink.

6 Responses to Trick or Treat – The Joy of the Sugar High!